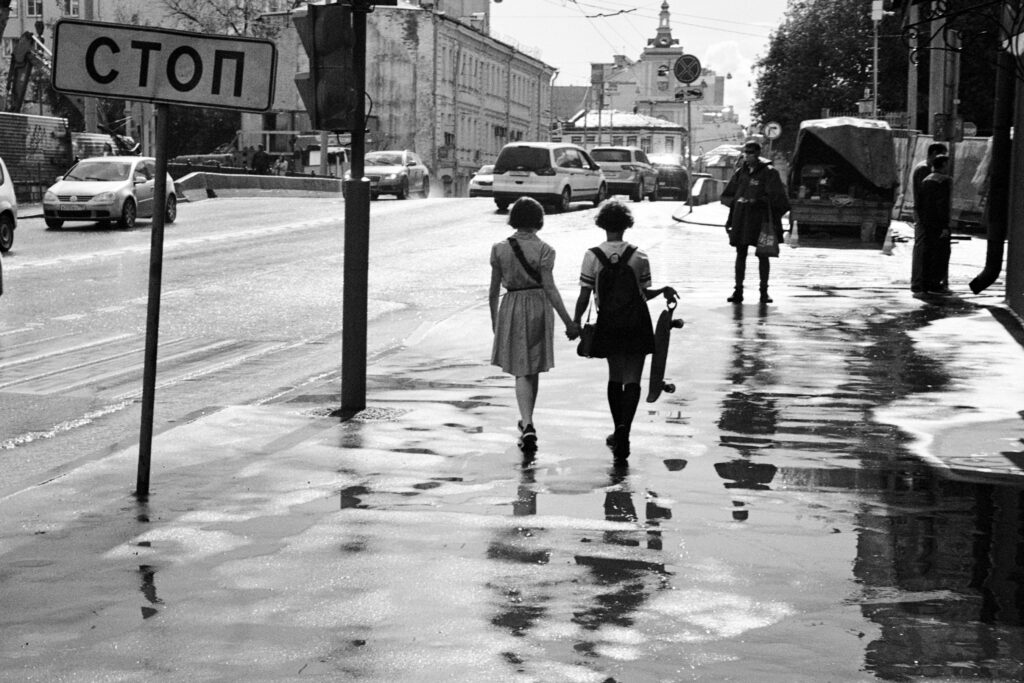 In the city of Volgograd, where I was born, black and white film could not be developed, so I limited myself to shooting with one roll, which we developed manually.

Above – some of my first b/w photos. Soviet old film (I don’t remember which one) on FED-2.

3 years ago I moved to Moscow….

After moving to another city, I decided to try b/w film again – actually, in the first days of my stay in a new city. It seemed like something new, especially after a long break. The excellent Summicron-R 90mm provided the best quality after the Soviet lenses. Unfortunately, the Leica R system did not get along with me: it`s heavy and large compared to rangefinder cameras.

I’ve always liked “colorless” photography – a kind of “clean” picture of light and shadow. Although it is important for me that monochrome photography does not slide into a simple picture with a b/w filter as much as possible. At the beginning of my acquaintance with different b/w films I filmed without looking for a specially suitable subject for the lack of color. Now, I take with me two cameras with me. So that I have a choice between monochrome and color. Sometimes a digital camera becomes “monochrome”- Leica M9 handles it like no other. Fuji X-Pro1 excellent shooting b/w too.

Originally, I needed photography to visualize memories. More precisely, it was something like a sketch pad. Sketches are essential for inspiration to start painting on canvas/paper later. Unfortunately, after the move, I never started painting, but continue to photography. Hopefully I’ll get back to the initial idea soon.

My first camera was bought as a sketch tool for the artist’s grandfather, as described in my article about him.

Moscow still makes me curious – each of it`s street. Walking around Moscow gradually introduced me to street photography.

Despite my love for monochrome photography, I have not given up on color. I do not want to choose one thing. What for? My grandpa sometimes painted as graphics and painting.

Partly black and white photography helps me not to notice the grayness of the Russian sky. The sun is not a frequent visitor to us. Even the fact that in the photo the sky will be gray anyway (most often) – it`s not perceived in contrast with other objects. Also, due to the grayness of the sky faded colors are not visible in monochrome photography, which is obvious.

As I have noticed, photographers try to maximize the colors in their photographs, especially taken in cloudy. Unfortunately, in these cases the photo loses its realism and becomes somewhat cartoony. Taking into account the fact that photography more often and so tries to bring a special look – the intensification of the color gives the effect of “butter oil”. To be fair: a realistic photo on a cloudy day is often very dull.

My street photography started out as a “sketch in a notebook” and is now gradually moving to documentary. An idea to shoot in such a way that the photo is a reflection of my thoughts about the subjects comes to my mind. Although it seems physically impossible. Perhaps, it should turn out so that the plot, light or color hint to the viewer about the way of thinking.

Having tried many films, I came to the conclusion that the whole ILFORD film is more or less good… But FOMAPAN and the ILFORD`s Kentmere scion are not very good. I liked the domestic monochrome A-125: it has a strong contrast and moderate grain, plus sometimes it gives an infrared effect.

Most likely the A-125 is more sensitive to infrared light. Under certain conditions unknown to me, the sky in photographs may turn black in contrast with a bright light object.

So far, for me it`s more convenient to shoot b/w film, since after developing a scan or when printing, you do not need to radically finish something with tones or contrast. At least I don’t do that. Of modern digital photographers who shoot only in b/w I like Alan Schaller, but he clearly has deep processing of photos.

Definitely I will continue to take with b/w film, more and more immersed in documentary photo. Perhaps I will be able to express my felt emotions and thoughts through photography.

As a result of October 2020 one of my photographs went to the exhibition (Moscow):

This is how my first three years of black and white photography went.

The sudden and prolonged coronavirus epidemic quickly escalated into a pandemic. Epidemic put an end to travel abroad. On another vacation, I went to Crimea again. Sevastopol temporarily remained closed to the tourist visit, so we stopped in Yalta, just like a year ago. This time I chose the apartment as close to the sea as possible. END_OF_DOCUMENT_TOKEN_TO_BE_REPLACED

[an error occurred while processing the directive]